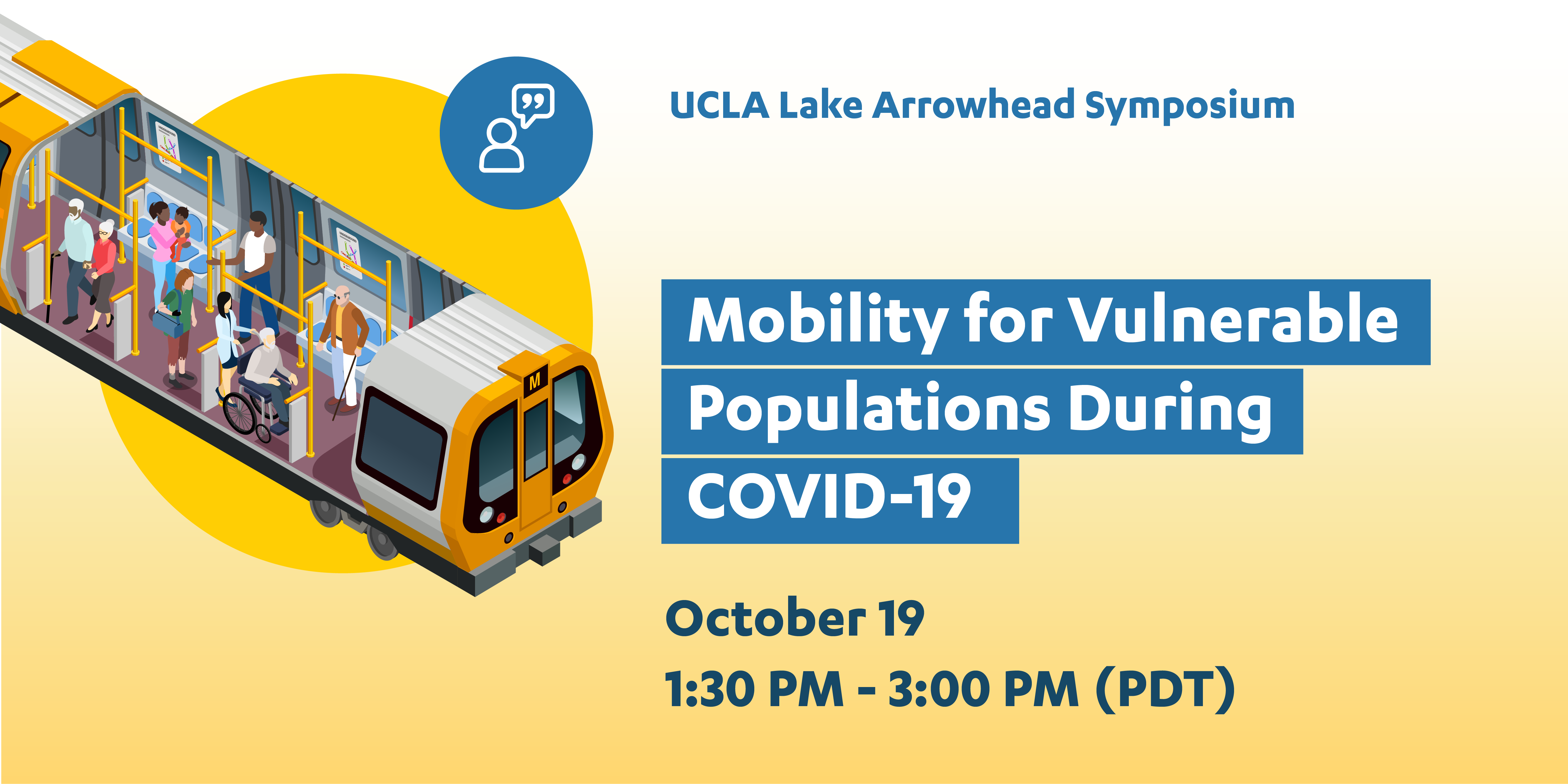 Mobility for Vulnerable Populations During COVID-19

Mobility for Vulnerable Populations During COVID-19

The COVID-19 crisis disproportionately impacts the most vulnerable in our society, including to their mobility. How has the pandemic affected patient access to routine, in-person medical appointments? How do public health precautions affect evacuations during a disaster like wildfires? What do we know about the mobility needs and behaviors of low-income populations? Knowing how the pandemic touches on and shapes the mobility of these vulnerable populations can inform government and community response.

Evelyn Blumenberg is a Professor of Urban Planning and Director of the Lewis Center for Regional Policy Studies in UCLA’s Luskin School of Public Affairs. Her research examines transportation and economic outcomes for low-wage workers and the role of planning and policy in addressing transportation disparities. She holds a BA in political science from the University of California, Berkeley, and an MA and Ph.D. in urban planning from the University of California, Los Angeles.

Katherine Chen, MD, is a practicing primary care physician and a postdoctoral fellow in the National Clinician Scholars Program. She is currently pursuing a PhD in Health Policy & Management at UCLA. Her research explores equity issues at the intersection of urban planning and population health, with a focus on reducing health disparities and improving access to opportunities for well-being through policies that shape housing, transportation, and neighborhood environments.

Stephen Wong is a doctoral candidate studying Transportation Engineering in the Department of Civil and Environmental Engineering at the University of California, Berkeley. His research focuses on the intersection of evacuations, decision-making, resilience, public policy, and shared mobility. He is a graduate student researcher at the UC Institute of Transportation Studies’ (UC ITS) California Resilient and Innovative Mobility Initiative (CA RIMI). Stephen serves as a member of the Committee on Disaster Response, Emergency Evacuations, and Business Continuity (AMR20) at the Transportation Research Board (TRB) and the Emergency Management and Evacuation Working Group at the International Association for Fire Safety Science (IAFSS). He was a National Science Foundation (NSF) Graduate Research Fellow, an Eno Center for Transportation Fellow, and a Dwight D. Eisenhower Transportation Fellow.

Lys Mendez is a communications professional and urban planner with expertise in public policy, ethnic media and community outreach. Most recently, she worked at Bird, an electric scooter company, where she led government relations in Los Angeles, the Bay Area and Mexico City. She has worked as a strategic communications consultant for clients such as The California Endowment, the Parks Now Coalition, Community Coalition and CicLAvia, the popular roving open-streets event in Los Angeles County. She was a communications consultant for Mayor Garcetti’s Vision Zero initiative and 100 Hours, a project to re imagine traffic solutions in Los Angeles County. She has also supported projects in the immigration space and worked as an urban planning consultant for the City of Los Angeles to launch the Plan for a Healthy LA, which provided public health guidelines for the city’s future growth and development. Prior to consulting, Lys worked for Mayor Antonio Villaraigosa, for the County of Riverside and as a newspaper reporter for the Riverside Press-Enterprise.

Resources from the panelists